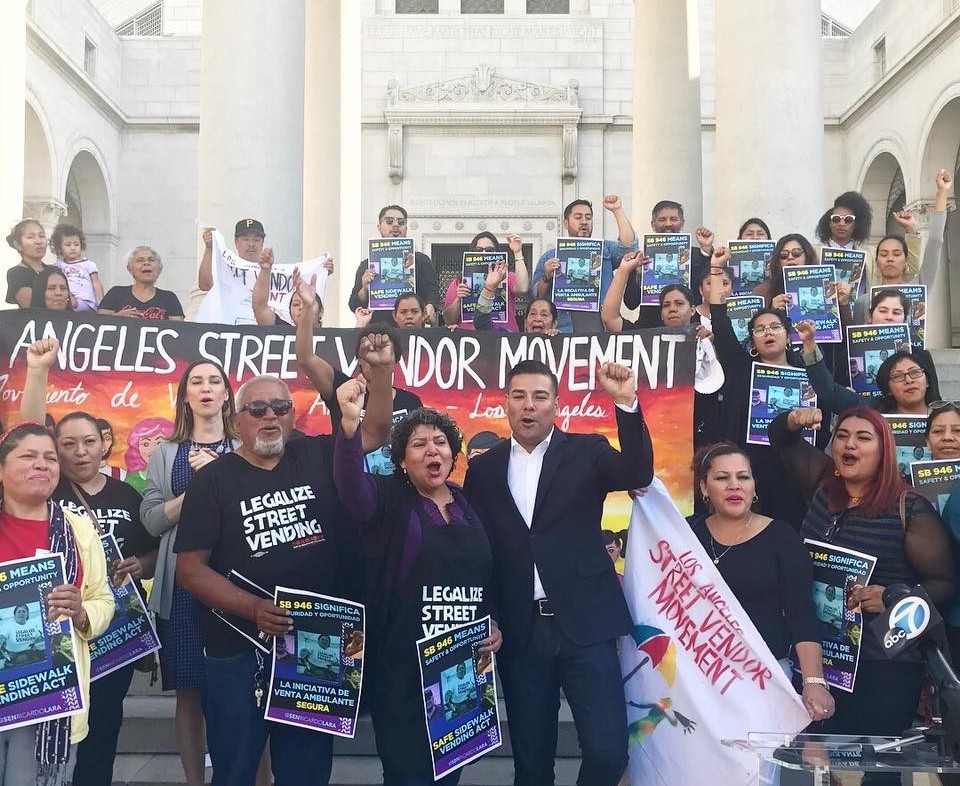 California Governor Jerry Brown signs SB946 (Lara) The Safe Sidewalk Vending Act. This historic legislation ends criminalization of sidewalk vending and brings thousands of entrepreneurs into the Golden State’s economy.   “I feel excited with the news of Governor Brown signing SB946” said Caridad Vasquez, Sidewalk Vendor and Leader of the Street Vendor Campaign. “Before we were working in the shadows, now we will be seen by everyone and can contribute to our economy openly.”   In Los Angeles, the Los Angeles Street Vendor Campaign (LASVC) has been working with vendors since 2012 to find solutions supporting the local entrepreneurs. Although the LASVC works with Los Angeles vendors they received inquiries from vendors across the state.   “In February of this year, Senator Ricardo Lara introduced the bill to further California’s leadership in protecting its undocumented residents and workers. We supported the bill and we are excited that the Governor signed the bill today” stated Rudy Espinoza, Executive Director at LURN and member of the LASVC.   The Safe Sidewalk Vending Act connects various important issues to the quality of life of Californians, especially women. Women make up a majority of the estimated 50,000 vendors in Los Angeles; advocates estimate 80% of street vendors are women.   “With the Governor’s signature now thousands of sidewalk vendors across the state will be able to provide for their families without fear, especially our Women Vendor leaders that are at the forefront of this movement,” said Isela Gracian, President of East LA Community Corporation.   Sidewalk vending is an important and celebrated part of California’s culture and economy. Vendors were unfairly denied access to the formal economy and have suffered the harms of local criminalization. Every day that vendors go out to sell, they run the risk of confiscation, jail, and even deportation. With SB946 this will change for vendors across California. The law prevents criminal penalties for sidewalk vending, offers retroactive relief to vendors with pending citations and prior convictions, and establishes flexible standards for local vending regulations.   “Now thanks to Senator Lara and Governor Brown, SB946 protects California’s low-income immigrants and workers from the devastating consequences of criminalization, promotes safe and regulated vending according to local conditions, and unlocks new opportunity for entrepreneurs throughout the state,” said Doug Smith, Staff Attorney at Public Counsel.